A Round Of Applause For Tilly Aston // Women + Disabilities

While Julia Gillard acted in her role as member of parliament, there have been many women championing the rights of people with disabilities in the years, decades and centuries before the NDIS.

One in particular was Matilda (Tilly) Aston (1873 – 1947).  Tilly was a driving force for disability activism and the game changer of her time.  Long before the NDIS, Tilly, who was born with deteriorating vision and lost her sight at the age of seven, campaigned throughout her life for independence and social and economic participation, the provisions of reasonable and necessary supports, the pursuit of goals, the right to exercise choice and control, and raise community awareness.  All of which are cornerstones of the NDIS we see today.

Despite being born in the late 19th century, into a patriarchal and ableist society, where many many people, including children with a disability were segregated and institutionalised, she did not let her disability, her gender or the social thinking of the day deter her.

Often referred to as ‘Australia’s Helen Keller’, who was also a friend and contemporary, Tilly achieved “firsts” not only in Australia but in some cases the world.  She played a fundamental role in progressive and lasting changes for people who were blind or low vision.

With an eagerness to learn and her strong confidence, at the age of nine Tilly left her family and home in Carisbrook Victoria to become a full-time boarding student at the Asylum and School for the Blind (later renamed Royal Victorian Institute for the Blind) in Melbourne.  It was here that Tilly started to come into her own.  Intellectually bright, she completed her schooling and achieved her senior school certificate.  This led to her passing the Matriculation Examination at the University of Melbourne, the first Australian blind woman to do so.  Unfortunately, the lack of text books in braille resulted in Tilly not being able to keep up her studies.  After two years she withdrew as she was not able to keep up with her fellow sighted students.  Although Tilly felt she had not only let herself down, but also her family, friends and supporters, the lack of braille books became the catalyst for her to establish the Victorian Association of Braille Writers and Library.  Founded in 1894, it continues to operation as the Vision Australia Library, a world leading accessible format library service for people with print disability.

Long before the slogan “nothing about us without us” became a motto of disability advocacy, Tilly firmly believed that “the only proper managers of affairs or people who were blind or had low vision, were those people themselves.”  With that, in 1895, she formed the Associated for the Advancement of the Blind (AAB), an organisation that was governed and operated by and for people who were blind or low vision.  After name changes and merges, it still continues today in the form of Vision Australia.

With the founding of the two major and influential Associations, Tilly continued to advocate for equitable services.  Through the AAB, Tilly led significant changes that would also influence similar changes around the world.

During her lifetime, she was formally recognised for her achievements having been awarded the Awarded the King’s Medal and Distinguished Citizenry in 1935 and 1937.  Posthumously the recognition is in the form of cairns, monuments, inclusions in honour rolls, and the naming of a federal electorate.

Tilly Aston was more than a game changer.  She is a role model, one who inspires and one to aspire to.  Her strength and tenacity deserve to be acknowledged and celebrated not only on International Women’s Day, but all year round.  If she were alive today, she would applaud the ethos of the NDIS, and the options it provides participants, including NDIS plan management, enabling choice and control.  She would applaud Canny Plan Management’s support and advocacy for not only its NDIS participant clients, but all people with disabilities and their support networks. 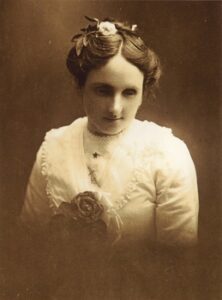 Get in touch if you would like to know more about Canny Plan Management, and how we support NDIS participants with managing their funding through their plans – we are are the registered NDIS Plan Managers you need to have working with you.

GST + The National Disability Insurance Agency… Do We, Can We, Should We? Written by: Anthea Taylor l NDIS Plan Management Team   This time last year, we wrote about...

From working for one of Australia’s largest independent finance broking firms and taking a short hiatus before returning to the industry in 2021 to set up as a broker herself...

Steps to Starting A New Business

Steps to Starting A New Business Written by: Anshul Gupta l Accounting Team   While there are many Australians who dream about being their own boss, the reality of setting...

Assessment of the Former Home When Entering Into Aged Care

What Happens To The Family Home When Moving Into Aged Care? Written by: Samantha Butcher l Advisory Team   A question we are asked every day by our clients, who...

The ‘Power’ in Power of Attorney

The ‘Power’ in Power of Attorney Written by: Karlene Wightman l Legal Team   It’s a common myth that when you divorce or separate from your partner that your Powers...

Facts Matter (When It Comes To the National Disability Insurance Agency) Written by: Anthea Taylor l NDIS Plan Management Team   As the saying goes, never let the truth get...